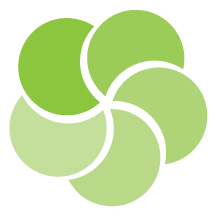 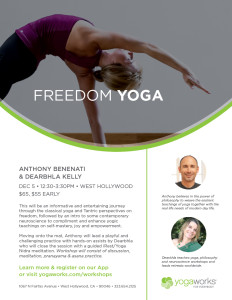 Join Dearbhla Kelly and Anthony Benenati for an entertaining journey through the Yoga perspectives on freedom, complimented with contemporary teachings from neuroscience.

In addition to these enlightening discussions, the workshop will include meditation, breathing, and hand-on assisted movement practice.

Anthony Benenati is a pioneer in the LA yoga community, Anthony opened City Yoga in 1999, one of the premiere independent yoga studios that changed the fabric of LA yoga. Since then he has trained hundreds of student teachers around the globe. He is known for his playful, innovative, yet traditional style of Hatha Yoga. Anthony believes in the power of philosophy to weave the esoteric teachings of yoga together with the real life needs of modern day life. Anthony travels the globe teaching but calls LA his home along with his 3 children.

Dearbhla Kelly born and raised in Ireland, Dearbhla Kelly, M.A., is a Los Angeles-based yoga teacher, philosopher and writer. Her articles have been published in Yoga Journal, Huffington Post, Elephant Journal and Origin Magazine and numerous other publications. She is particularly skillful at marrying the more esoteric teachings of yoga with modern scientific insights and the practicalities of everyday life, and weaving the philosophical aspects of yoga into her asana teaching. Her lilting Irish accent and Dublin wit make her classes uniquely enjoyable and her generous hands-on assists speak to the depth of her own practice. Dearbhla teaches yoga, philosophy and neuroscience workshops and leads retreats worldwide. www.durgayoga.com 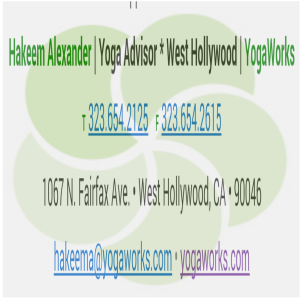